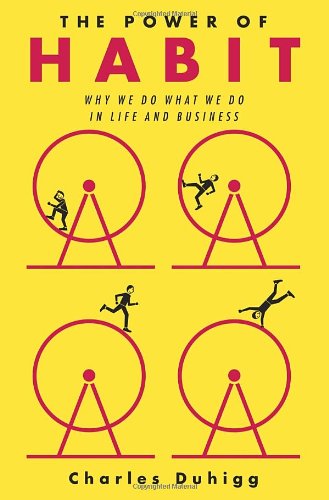 I’m Reading a really fascinating book called, The Power of Habit: Why We Do What We Do in Life and Business (affiliate link) by Charles Duhigg.  There’s a lot that can be learned and applied here.  I also think there is a fallacy that can also mislead us and set us up for failure and disappointment.

If you were to ask Michael what’s going on in his head before competition, he would say he’s not really thinking about anything. He’s just following the program. But that’s not right. It’s more like his habits have taken over. When the race arrives, he’s more than halfway through his plan and he’s been victorious at every step. All the stretches went like he planned. The warm-up laps were just like he visualized. His headphones are playing exactly what he expected. The actual race is just another step in a pattern that started earlier that day and has been nothing but victories. Winning is a natural extension. (kindle location 1794)

My experience is that it is very difficult to live in an environment that is 100% controlled though some people kill themselves and drive others crazy trying to achieve it.

It’s tempting to think, “Oh, if I just do the right things, I’ll have a perfect life and be a super star too.”  My problem with this quote and the impression it leaves is that that we can become programmed robots.  And that if we program ourselves and try hard enough we’ll be able to achieve perfect, robotic execution.  I think it is possible.  I also think we are setting ourselves up for a lot of frustration and opportunities to get down on ourselves if we think this can be a routine thing.

I think the example Duhigg gives earlier in the book of Coach Tony Dungy’s experiences is a better example where things didn’t turn out so perfectly and where habit and discipline can pay off in the long term.

I’m only a third of the way into the book.  Maybe it really is possible to get habits this embedded in our lives and to benefit from them.  What’s missing for me so far is how much time it takes for those habits to become embedded.  Could it be the 10,000 hour principle at play here?  I guess for Michael Phelps, given how long he was swimming and training before the Olympics that could be true.

What about the rest of us who lead “normal” lives and don’t have a coach watching over and directing us every day?